Buddhist centre opened in Uganda, the first on the African continent 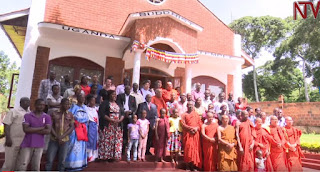 Please on the LINK below to access the video about the ordination of two young Africans at the Buddhist Centre in Uganda.  The Burmese and Thai Buddhist communities to have participated in the event.The chief monk of the Centre is Ven. Buddharakkita Thera whom we have met on two occasions on visits to the Bhavana Society established by the Most Venerable Henepola Gunaratana Mahathera.  Ven. Buddharakkita had first ordained as a monk under the guidance of the Late Ven. U. Seelananda Thera (a pupil of Ven. Mahasi Sayadaw) who was in charge of the Burmese Buddhist Monastery in San Francisco.
Ven. Buddharakkita was very much in demand by African American communities in the USA when he was residing at the Bhavana Society in West Virginia.

The Ugandan Buddhist Centre is the first of its kind established by native African people. Ven. Buddharakkita’s mother to has ordained as a Buddhist Nun residing at the Centre.